This is my experience of my autumn seasonal swop of my clothes: specifically how this year’s swop is spurring me to get rid of things.

It helped that we took our annual summer holiday in September, missing much of the summer to autumn transition in the UK.

I had a week at home, before a trip to a party conference.

As I lugged my heavy suitcase into the hotel and hung the clothes up, I really felt I’d overpacked for the conference. Partly that was planned, with multiple changes of clothes: I’d always intended to swop my travelling top into something smarter (although the top I’d been wearing was smart enough). But partly it was because I had blouses I rarely had the opportunity to wear, and was desperate to actually use them.

One blouse I’d worn once before. It was soft and silky, dark in colour with a subtle flounce. I’d stalked it on the website, checking it up, watching as it went into clearance, swooping in to buy when the price fell to an amount to I felt I could justify. And at last it was its turn to be worn again.

It gaped. The flesh of my bosom was clearly visible, and not in saucy, cleavage-bearing, alluring style, but in a frumpy, badly fitting, unflattering style.

I put on the camisole top I had with me, and tried the blouse again.

The blouse still gaped, still as unflattering as before.

I put on my jacket – the overall look was still frumpy.

I took off jacket, blouse, camisole and then put on a shirt I had already worn for an evening. The lovely, silky, frumpy blouse went back in my suitcase, to be discarded when I got home.

Time to put my summery clothes away until next year, and pull out my more autumnal ones. Looking in my drawers, I realised the small selection in circulation included several I didn’t much like, but there were a lot more I did like going unworn. Time for radical action.

I took everything to my daughter’s room. (She’s at university, so the bed is free at the moment.) I made piles. Warm clothes for the depth of winter, cool clothes for hot summer, tops for for the end of summer, tops for the start of autumn, any of which I might not wear in an ordinary October. 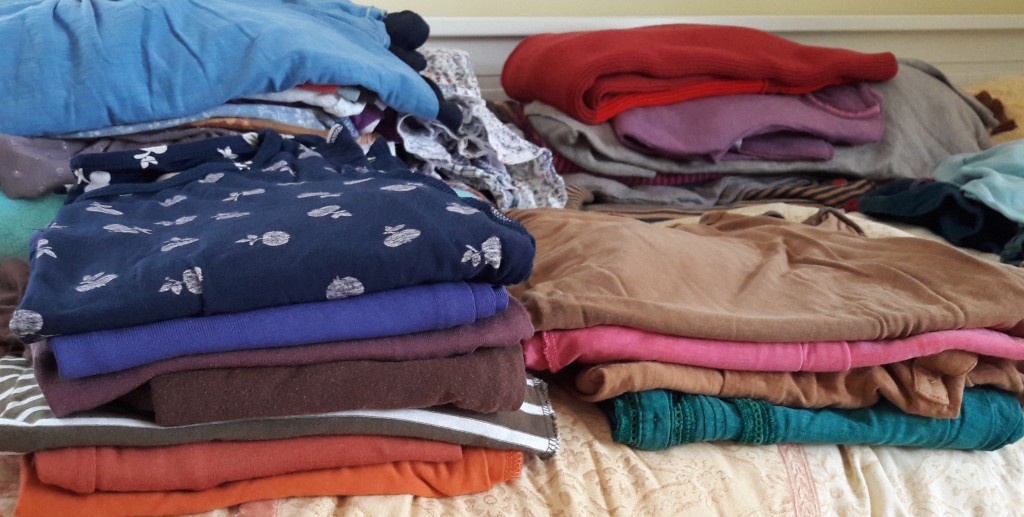 The first three rules are self-explanatory, and would probably be enough to make a decision. The final rule over-rides the rest: if I really liked it, I could keep it, and if I felt ‘meh’ for whatever reason I could get rid of it.

By the second day, five tops were in the ‘go’ pile, even without putting them on. Three were just ‘meh’, one was worn and the other uncomfortable. Interestingly, one top I’d expected to get rid of stayed: I’d bought two at the same time, and one was worn out, so I never wore either. Getting rid of the worn out one meant I knew the other was fine, and could start wearing it again.
The experiment continues. Shirts are being kept: shirts are being discarded, along with a pile of unfashionable jeans. Space is being made in my wardrobe.